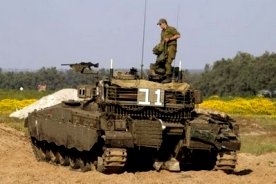 An Israeli tank is stationed along the border with the Gaza Strip on April 9. Israeli and Palestinian officials floated a ceasefire on Sunday to end an upsurge of violence in Gaza, as Israel warned of a stronger response if rocket fire from the coastal enclave continues. (AFP/Jack Guez)

JERUSALEM, April 10, 2011 (KATAKAMI.COM / AFP) – Israeli and Palestinian officials floated a ceasefire on Sunday to end an upsurge of violence in Gaza, as Israel warned of a stronger response if rocket fire from the coastal enclave continues.

Speaking shortly after a rocket fired from Gaza struck near the southern city of Ashkelon, Prime Minister Benjamin Netanyahu warned that any further attacks would be dealt with harshly.

“If the criminal attacks against Israeli military and civilians continue, Israel will respond with even more force,” he told public radio.

But both Israeli and Palestinian officials expressed support for a potential ceasefire, after days of rocket fire and retaliatory Israeli air raids that have killed at least 18 people in Gaza.

The flare-up came after an anti-tank missile fired from Gaza hit an Israeli school bus on Thursday, wounding two people, one of them critically.

Defence Minister Ehud Barak said that Israel was ready to end the confrontation, if Hamas and other armed groups stopped firing.

“If they cease firing, we’ll cease firing,” he said, reacting to reports that the political wing of the Islamist group Hamas, which controls Gaza, was ready for a truce.

“We cannot tolerate firing” against Israel, said Barak, who has indefinitely postponed a trip to Washington in the face of escalating violence around the territory where Israel fought a devastating 22-day conflict in December 2008-January 2009.

“We will act along the lines of what happens on the ground,” he added.

It was the first time that an Israeli minister had floated the possibility of a ceasefire since deadly clashes with the Palestinians broke out.

Hamas and other armed groups in Gaza had previously announced a unilateral truce that unravelled before it had a chance to take hold, with militants firing dozens of rockets and mortar rounds into southern Israel.

But on Saturday, a senior Israeli security official said Hamas’s political wing had asked Israel for a ceasefire.

“The political branch of Hamas has sent a message asking for an Israeli ceasefire” in exchange for a halt to Palestinian attacks, the official told AFP on condition of anonymity.

Hamas spokesman Sami Abu Zuhri said Sunday that the group would be willing to stop firing if Israel announced a ceasefire.

“The ball is in the court of the occupation,” Abu Zuhri told AFP. “Our message to the occupation is that a truce will be met with a truce.”

He said Hamas was not trying to increase tensions with Israel, but defended the actions of the Islamist group and other militant organisations in Gaza.

Rockets and mortar rounds fired from Gaza continued to hit Israeli territory on Sunday, with a rocket believed to be a Grad exploding in an uninhabited area near the southern town of Ashkelon, a police spokesman said.

Three mortar rounds fired overnight landed in the Eshkol region, damaging an electrical line and cutting power to some in the area for several hours, army radio said.

On Saturday, Hamas declared a state of emergency in the face of the deadly Israeli reprisals against Gaza.

“The (Hamas) interior ministry has decreed a state of emergency. All security forces must work 24 hours a day along with the civil defence and medical services to protect and save inhabitants taken as targets by the Zionist occupier,” ministry spokesman Ihab al-Ghussein said.

The confrontation is the deadliest since the end of Operation Cast Lead, the offensive Israel launched in December 2008 that claimed the lives of some 1,400 Palestinians — more than half civilians — and 13 Israelis, including 10 soldiers.

The defence system, the first of its kind in the world and still experimental, is not yet able to provide complete protection, however, army commanders have warned.  (*)

Error: Twitter did not respond. Please wait a few minutes and refresh this page.